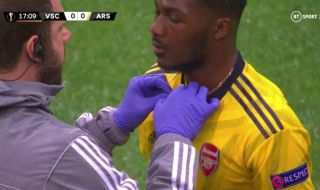 Arsenal ace Ainsley Maitland-Niles had a bit of an embarrassing moment in the first half of tonight’s Europa League clash with Vitoria.

Take a look at the video clip below as the youngster had to stop early on and have his necklace removed.

In truth, this was one of the few highlights from Arsenal in the opening 45 minutes as they put in another poor performance under the struggling Unai Emery.

Quite why Maitland-Niles forgot this rule about jewellery, however, is beyond us and won’t sit too well with Gunners supporters who already have enough reasons to be frustrated with their team right now.

— out of context arsenal (@outofcontextars) November 6, 2019