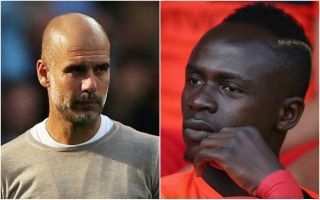 Liverpool forward Sadio Mane has responded to Pep Guardiola’s dig about him being a diver.

The Senegal international seems to have taken the Manchester City manager’s comments pretty well, joking that he’ll continue to dive if it helps win penalties for his team.

Mane did also state quite clearly, however, that he does not believe he is a diver and that Guardiola’s comments are intended as a clever tactic to influence the referee when Liverpool host City in the Premier League this weekend.

“If it could be a penalty for sure I will ‘dive’ again,” he is quoted by the Daily Mirror. “If the dive will give me a penalty then I will do it to get it back. Why not?

“But what Jurgen said is correct. I do not dive.

“It’s a bit clever from him to get the attention of the referee but I will just play my football. I don’t pay attention to what he’s saying because it’s part of football.

“Even though I saw him commenting about it, what he said, for me, I think it’s positive.

“The only thing I can say I will be ready for the team, to give everything possible, and to help my team.”

Mane will be hoping to help Liverpool to an important win against the reigning champions, who finished just a point ahead of the Reds last season to take the title on the final day of the campaign.

LFC are now six points clear at the top of the table, however, and are yet to lose a league game so far this season.

Mane has been in scintillating form for Jurgen Klopp’s side and will no doubt be one to watch against City this weekend, whether he dives or not.