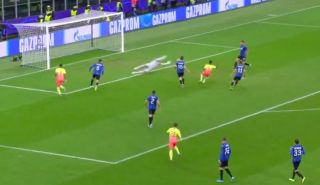 Manchester City have scored an early goal away to Atalanta in tonight’s Champions League clash, with Raheem Sterling applying the finishing touch to a fine team move.

Watch the goal video below as City rip through Atalanta with some incisive and quick passing in and around the penalty area, before Sterling finishes with all the composure and quality we’ve come to expect from him.

The England international has been on fire for Pep Guardiola’s side in recent times and has brought a crucial moment of quality to the team once again this evening.

Atalanta may now have to do what they can to avoid a drubbing tonight as an early City goal usually means their opponents are in for a long evening.

Sterling at it again!! Great backheeel from Jesus and Raheem makes no mistake inside the box! #MCFC pic.twitter.com/EifgLCyW7L