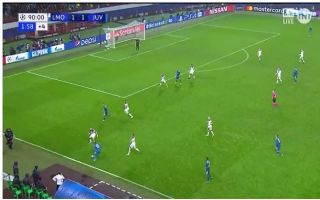 A lot of teams tend to struggle with the trip to play Russian opposition in Europe, but Juventus have manged to grab a late winner after a fantastic goal from Douglas Costa.

His goal was the total opposite of Aaron Ramsey’s poached opener from the goal line. He takes seven players out of the game as he weaves his way towards the box, exchanges a lovely back heel with Gonzalo Higuain and picks his spot:

A great one-two with Higuain and Costa slots it home!

The late goal proved to be vital as Juventus have now qualified for the next round. Juve will be pleased to see they can still grab decisive goals without Ronaldo on the pitch.

READ MORE: Video: Aaron Ramsey risks the wrath of Ronaldo as he steals his goal as it crosses the line