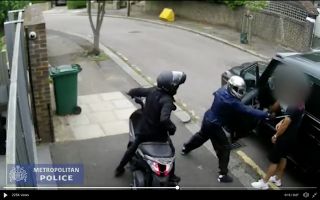 The shocking new footage shows Kolasinac being caught by surprise with his back turned to the violent thugs. The defender stood his ground and defended Ozil and his wife despite the attackers waving a sharp object around his arm several times.

Kolasinac bravely charged towards the attackers, throwing punches, before they fled.

Take a look at the new footage of the incident below:

CCTV footage shows they didn't hesitate to draw a weapon when making demands but didn’t bargain on being challenged. One victim stood his ground and fought the suspects off ? https://t.co/x1PURsQ6sz pic.twitter.com/7fLmlp8dDA

Kolasinac, known as The Tank, has a knife repeatedly pressed up against his arm.

The Metropolitan Police have revealed that both of the arrested men have pleaded guilty to attempted robbery.

Whatever’s side about Kolasinac’s ability on the pitch – the defender’s character and loyalty can never be questioned after his unbelievable bravery in the face of serious danger.