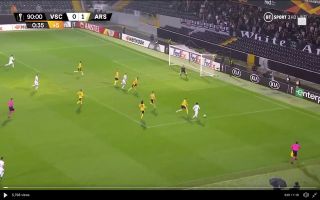 Some Arsenal fans blasted their side’s ‘shocking’ and ‘comical’ defending that led to Vitoria’s stoppage time equaliser in this afternoon’s Europa League clash.

Tottenham academy graduate Marcus Edwards charged down the right-wing in the 90th minute of this afternoon’s Europa League clash between Arsenal and Vitoria.

The England youth international skipped past Rob Holding with ease before crossing the ball into the box.

Goalkeeper Emi Martinez drifted around in no man’s land and Arsenal couldn’t stop Bruno Duarte firing the ball into the back of the net with a lovely overhead kick.

Without taking away from Duarte’s amazing finish, this goal should have been prevented. There were five Arsenal players close to the line that failed to stop the man – and then the ball.

Take a look at Vitoria’s late equaliser below:

Marcus Edwards with the driving run, Bruno Duarte with the scissor kick!

Here’s how some Arsenal fans reacted to the team’s defending:

Being an arsenal fan so depressing and stressful! Never known a team that's so bad and embarrassing at defending!!!??? #arsenal

This is next level comedy defending from Arsenal. Unai Emery has managed to make Arsene Wenger look like a defensive mastermind! #VITARS

The Gunners really look no closer to transforming a seriously underperforming defensive line.