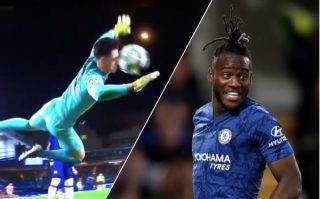 Michy Batshuayi took to Twitter to troll his Chelsea team-mate Kepa after the Spanish shot-stopper conceded a comical own goal against Ajax yesterday.

The former Athletic Bilbao man headed the ball into his own goal via his face yesterday night, as the Blues went in at half time 3-1 down against the Dutch giants at Stamford Bridge.

MORE: Chelsea outcast targeted on free transfer as club aims to reunite him with former teammate

Chelsea did end up completing a brilliant second half comeback against Ajax, drawing 4-4 in order to go joint top of their Champions League group.

It was one of the best and most dramatic comebacks we’ve seen in a long time in the Champions League, one that we’re sure will remain in the memories of Chelsea fans for a long time.

And judging by his tweet here, we’re sure Kepa won’t be able to forget about his own goal any time soon, especially if Batshuayi has anything to do with it.

The Belgian took to social media to welcome his Blues team-mate to the ‘meme club’, something Batshuayi is firmly a part of after he was made fun of after he kicked the ball into his own face during the World Cup in the summer of 2018.

Kepa’s own goal was funny to say the least, and we’re sure we’ll be seeing the above clip posted on Twitter numerous times over the next few weeks and months!