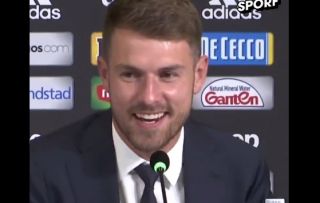 Juventus ace Aaron Ramsey has revealed that he apologised to Cristiano Ronaldo after their clash with Lokomotiv Moscow in the Champions League.

It looked as though Ronaldo was set to give Juventus an early lead against their opponents, but as his effort was about to cross the line, Ramsey made sure it went into the back of the net.

The goal was indeed awarded to the Welshman after the game, and he revealed in his post-match interviews that he apologised for effectively stealing the goal off his Juve teammate.

“I apologised to Cristiano,” he is quoted as saying by Calciomercato. “I went for the ball instinctively, I didn’t want to steal the goal from Cristiano.

“Qualification was our goal, we still have something to do to secure first place but today we are happy. I am very happy [to be the first British player to score for Juve in the Champions League], the important thing is to contribute to a good season for Juventus. Now I hope to find continuity.”

Any player in his position would surely have done the same as ultimately Ramsey had to be sure that the ball would cross the line to give Juventus a crucial early lead.

In turn, it’s questionable as to whether or not an apology was necessarily needed, as the pair appeared to share a joke about it as they celebrated.

Nevertheless, Ronaldo’s wait for a Juventus goal from a free-kick goes on, and that’s largely down to Ramsey after Wednesday night.