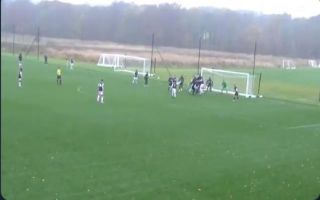 We’ve been treated to two of the rare but wonderful events surrounding goalkeepers in the past 24 hours. Last night we saw Kyle Walker forced to go in goal after Claudio Bravo’s rash sending off for Man City.

Today we got to see the other side of it, where the keeper goes up for a corner in the last minute. It’s always strange how the corner taker tends to aim for the keeper, but this time it actually paid off.

It wasn’t quite the bright lights of the Champions League, it was Burnley U23’s vs Crystal Palace U23’s but it’s still some finish from Adam Legzdins:

What makes these moments extra special is total lack of humility from the keepers afterwards. The greatest goal by a keeper of all time was Jimmy Glass for Carlisle United – he responded to that with a shrug and saying he scored a hat trick in training so wasn’t truly shocked.

Legzdins took things one step further and compared himself to one of the greatest Premier League strikers of all time. The goal was reported on the Burnley official website, and it contained the following quote from the keeper:

“It was a great ball from Josh and the defender just tugged me a bit which kind of turned me around and I managed to re-direct it in like a young Alan Shearer!”

You have to think/hope that was said massively tongue in cheek, but it’s still a wonderful thing to see.