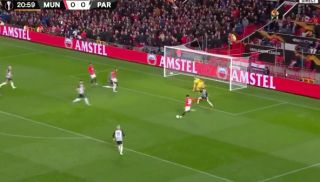 Mason Greenwood has scored another goal in the Europa League for Manchester United to put them 1-0 up against Partizan Belgrade this evening.

Watch the goal video below as the 18-year-old shows great composure and clinical finishing instincts to drive the ball home from close range.

Man Utd go up 1-0 after the youngster reacts quickest and finishes with ease! pic.twitter.com/ltARzN3Irw

Greenwood has long looked one of the most exciting talents coming through Man Utd’s academy, and he’s now starting to make more and more of a contribution in the first-team this season.

The wonderkid also scored for the Red Devils against FC Astana in this competition earlier this season as he takes the opportunities given to him in Europe by Ole Gunnar Solskjaer.