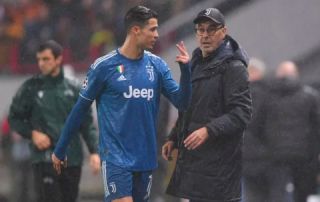 Juventus boss Maurizio Sarri has explained why he decided to replace Cristiano Ronaldo late on in their clash with Lokomotiv Moscow on Wednesday.

The two sides were level at 1-1 with around 10 minutes to go when Sarri decided to substitute Ronaldo and bring on Paulo Dybala in his place in the 81st minute.

Naturally, the decision would have raised some eyebrows given the Portuguese superstar has bagged over 700 career goals and so if there is one man that he would want out on the pitch leading the charge for a late goal, it would arguably be him.

However, he was taken off and watched on as Douglas Costa eventually found a dramatic late winner for the reigning Serie A champions, with Sarri’s side securing all three points and solidifying their place at the top of Group D in the Champions League while advancing to the knockout stage.

As seen in the video below though, it didn’t look as though Ronaldo was too impressed with having to come off, but Sarri has explained the reason behind the move to withdraw him.

“Ronaldo is not in great shape at the moment, as over the last few days he’s had a bad knee, so to compensate for it he is putting more strain on the adductor,” he is quoted as saying after the game by Calciomercato.

“He was already irritable towards half-time because it was causing him problems. On a sprint, he made a movement I didn’t like the look of, so I was afraid he’d really hurt himself and decided it was best to take him off.”

That in turn presents a fair reasoning behind the decision, as the last thing that the Juventus boss would want at this stage is for Ronaldo to be facing a lengthy spell on the sidelines by aggravating an existing problem or risking a fresh injury.

The 34-year-old has scored six goals and provided two assists in 13 appearances so far this season, and with the issues outlined by Sarri above, it remains to be seen if he starts in the encounter with AC Milan in Turin on Sunday night.

While Ronaldo continues to show that he is capable of being Juve’s talisman, as he prepares to turn 35 next February, Sarri will surely have to continue to use him wisely to avoid injuries becoming a problem in the latter stages of his career.