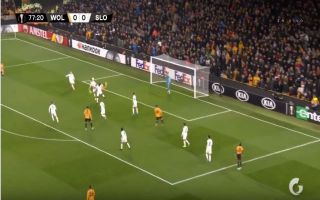 The overhead kick has always been one of the most impressive things in football. We’ve all tried it, thinking we might emulate Gareth Bale in the Champions League final – only to end up winded and flat on our backs.

In the most basic sense it does involve trying to kick the ball at head height, if a defender goes for it and you kick them instead should it be considered as serious foul play?

It’s always a tough one to figure out, but this effort from Wolves striker Raul Jimenez managed to knock his opponent out after catching him right on the head:

Raul Jimenez sent Slovan player to hospital and only got yellow. The player was not even moving for 7 minutes pic.twitter.com/bA1weLMbPU

The Slovan Bratislava player was knocked out and treated for a good few minutes before being stretchered off. Obviously we hope he’s okay, it might also lead to some sort of review about over head kicks and if they should be considered dangerous.