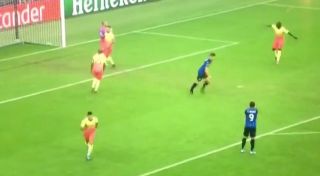 A series of unfortunate events led to Kyle Walker putting on the gloves and going in goal for Man City in their clash with Atalanta in the Champions League on Wednesday night.

After Ederson was replaced at half-time due to an injury, Claudio Bravo was sent off in the 81st minute forcing Walker to take up the role between the posts.

SEE MORE: Video: Kyle Walker saves a free-kick after having to go in goal for Manchester City

To his credit, he did make one key save from a free-kick to help City secure a share of the spoils, but he may well have to work on his time-wasting abilities.

As seen in the video below, Walker makes a pretty routine stop in injury time, but clearly not used to the ways of a shot-stopper and how they can waste valuable seconds on the clock, Benjamin Mendy had to remind him of what to do.

After furiously gesturing for his Man City teammate to go down, Walker eventually got the message and a good few seconds after catching the ball, he randomly decides to drop to the ground.

That was unsurprisingly met by whistles and jeers from the home faithful, and while he escaped a booking, Walker will be delighted that he managed to keep a clean sheet in his brief outing as goalkeeper to help City pick up a point.

As seen in his tweet below, Mendy was keen to joke about the incident too…

Benjamin Mendy instructing Kyle Walker to lie down on the ground after catching a ball was my fav moment at Atalanta – Man City. Especially cause he immediately and unnaturally did what was asked from him. pic.twitter.com/voAZ4wycQk

Still need some lessons but I got u bro no worries @kylewalker2 https://t.co/R3Zpf8hAfq