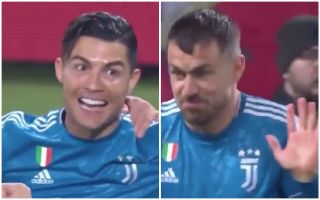 Juventus picked up a crucial 2-1 win over Lokomotiv Moscow in the Champions League on Wednesday night, although Cristiano Ronaldo didn’t get on the scoresheet.

The Portuguese superstar would have been forgiven for thinking he did after just four minutes as it appeared as though his free-kick was set to squirm over the line.

However, Aaron Ramsey pounced like anyone else would to make sure it did reach the back of the net and the goal was eventually awarded to the Welshman.

It appears as though Ronaldo found the funny side of it though as seen in the video below as he was seen smiling at his Juventus teammate as he questioned whether or not he had claimed the goal, while Ramsey hilariously protests his innocence and reassures Ronaldo that he thinks it’s his goal.

Unfortunately for the 34-year-old, his night came to a disappointing end as he was taken off in the 81st minute, with Douglas Costa eventually scoring a dramatic late winner for the Serie A champions to seal all three points and keep them top of Group D in the Champions League.

In turn, while it was a disappointing night on a personal level for Ronaldo, he’ll no doubt be delighted that Juventus were able to get the right result and secured a place in the knockout stage.

Ball was still slightly on the line when Ramsey touched it:
it’s Ramsey goal, not Cristiano Ronaldo’s pic.twitter.com/Og6PkvYlsG