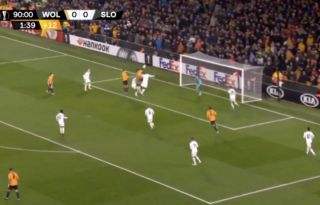 Raul Jimenez proved to be Wolves’ saviour tonight, as the Mexican international bagged a late header to hand his side the lead in injury time against Slovan Bratislava in the Europa League.

With the scoreline sat at 0-0 edging towards the end of the game, Jimenez popped up to score what’s surely going to be the winner against Bratislava tonight.

After a cross from Adama Traore was deflected up into the air, it was met by the head of Jimenez, who powered his effort home to hand the home side a late lead.