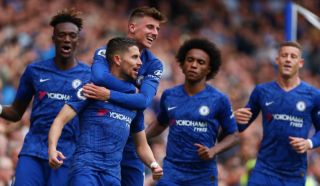 Chelsea have been handed a boost ahead of their clash against Crystal Palace this weekend, after manager Frank Lampard confirmed that England international Mason Mount will be in the Blues’ squad for the match.

Mount was taken off against Ajax in the Champions League earlier this week with what looked like a serious ankle injury, a sight that would’ve lead to Blues fans fearing the worst regarding the midfielder’s fitness.

However now, it seems like Chelsea supporters have nothing to worry about, as Mount has been named in his side’s squad to take on Roy Hodgson’s side at Stamford Bridge this weekend according to manager to Lampard.

As per the club’s official Twitter account, Lampard confirmed that the 20-year-old has been named in his side’s squad for their match vs the Eagles, with the player set to undergo fitness tests today in order to determine whether how many minutes he’s able to play.

Lampard reports that Ross Barkley is not in the squad for tomorrow due to an ongoing issue. Mason Mount is in the squad and his fitness will be assessed in the morning. #CHECRY

This news will come as a big boost for Chelsea, as Mount has been a key part of Lampard’s first team plans this season.

The youngster has bagged four goals and two assists in the PL, a decent return considering it’s Mount’s first ever campaign in the Premier League.

Mount has managed to muster up an impressive partnership with Tammy Abraham going forward for the Blues, a partnership they could see link-up yet again if this recent confirmation from Lampard is anything to go off…