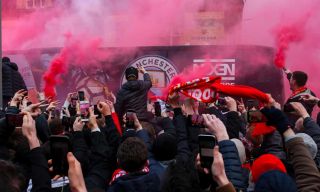 Man City have reportedly ‘sought assurances’ from Liverpool as they want a safe passage to Anfield ahead of their showdown on Sunday.

Ahead of their encounter in the Champions League in 2018, the City coach was ‘attacked’ and hit with various objects as it made its way to the stadium.

As per the Guardian, no one was injured in the incident, but the bus was left unsafe to drive and so unsurprisingly, Man City don’t want a repeat of that this time round ahead of their clash with their Premier League title rivals.

The report adds that the issue has been raised to executive level as they want guarantees that Liverpool are taking the matter seriously and will take the necessary steps to ensure the safety of their players and the coach this time round.

It comes after a social media post was shared asking fans to line the route that the City coach will take on its way to Anfield, with encouragement to bring “pyro, pints, flags and banners”.

It’s worth noting that there was no trouble among fans ahead of that Champions League game and no arrests were made by the police. However, City rightfully don’t want to see a repeat show of that trip to Anfield and so time will tell if Liverpool are willing to offer those assurances that they’re looking for.

The Reds sit six points clear of the reigning Premier League champions ahead of kickoff after 11 games, and so a win coupled with an eight-point lead could be decisive in the title race. In turn, City seemingly don’t want any drama before the game to effect the players.