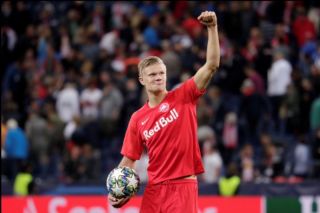 The Sun this week cited United and Arsenal as potential suitors for Haaland, while Tuttosport claimed that Salzburg will demand £86m to sell him.

United have not signed a definitive replacement for Romelu Lukaku, while the Gunners have only mustered 16 Premier League goals in 11 matches this season.

Haaland has netted 23 goals in just 17 games this season, with seven of those coming in the Champions League, including a hat-trick on his debut. It is no surprise that the 19-year-old Leeds-born Norwegian is being eyed by some top clubs.

Juventus, Barcelona and Real Madrid are keen on Haaland too, according to Sky Sports. But Sky also report that Haaland is considering a switch to the Bundesliga with Red Bull Leipzig.

Leipzig already have current Germany starting striker Timo Werner within their ranks, so their attack would arguably be among the best in world if they added Haaland.