Barcelona are reportedly ready to let French duo Samuel Umtiti and Ousmane Dembele leave the club in the January window, with the Blaugrana looking for around €180M for the pair.

Both Dembele and Umtiti have found themselves fluctuating in and out of Barca’s starting XI during the pair’s time at the Nou Camp, something that is mainly down to their inability to stay clear of injuries.

And now, it seems like the Blaugrana have finally had enough, as Don Balon state that Ernesto Valverde’s side have played the two up for sale, with Barca wanting €60M for Umtiti and €120M for Dembele.

This news will surely come as a boost for Man United, who’ve been linked with moves for the duo for some time now.

As per Le 10 Sport, Man United were very interested in acquiring Umtiti’s services during the summer transfer window, whilst the Red Devils were also credited with an interest in forward Dembele last month by Mundo Deportivo. 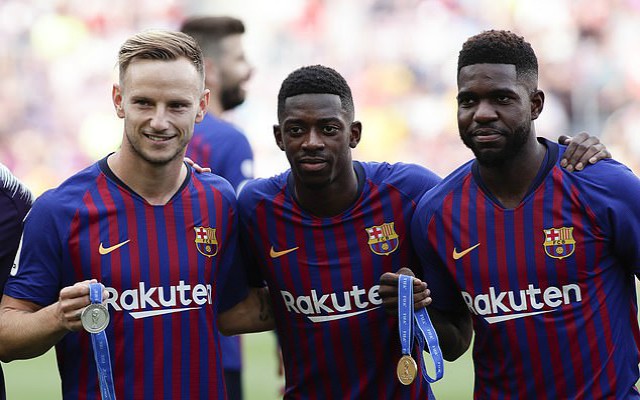 Both Dembele and Umtiti have been left out of France’s recent squad for their upcoming Euro 2020 qualifiers just 18 months after they helped Les Bleus win their second World Cup in Russia in the summer of 2018.

We assume that this was down to Umtiti and Dembele’s injury proneness, combined with their inability to stay fit throughout this season so far.

The French pair would definitely give United’s squad a boost in quality should the Red Devils manage to sign the duo.

Dembele would give Solskjaer’s side an extra dimension in attack, whilst Umtiti would give the Norwegian another top quality defensive option to choose from in defence alongside Harry Maguire.

Might be worth keeping an eye on this one, United fans…