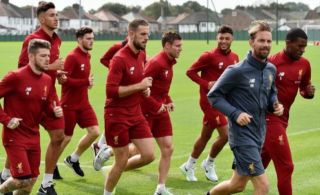 Liverpool fans are desperate to see Jurgen Klopp start Alex Oxlade-Chamberlain over Jordan Henderson against Man City on Sunday after the German confirmed that the Reds skipper is fit to take on Guardiola’s men.

As per Liverpool’s official website, Klopp confirmed that Henderson, and key defensive teammate Virgil Van Dijk, will both be fit to play against City at Anfield this weekend, news that’ll be come as a big boost for the Reds.

Both players have proven to be key parts of Jurgen Klopp’s first team plans so far this term, thus the news that they’ll be available to play against City on Sunday will surely be music to the former Dortmund boss’ ears.

However, it seems like despite this, LFC fans are hoping to see Klopp drop Henderson for their clash against City in favour of starting Oxlade-Chamberlain.

The former Arsenal man has been in good form lately, bagging a number of goals against the likes of Genk and the Gunners in the Champions League and League Cup respectively.

And if these tweets are anything to go off, it seems like some fans would rather Chamerlain claim a starting place over Henderson this weekend…

Ox deserves a place over Henderson

Henderson on the bench please, we need the Ox to start