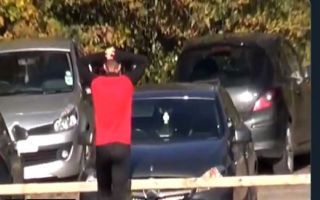 There’s nothing worse than seeing a ball fly off in the direction of the car park. Everyone collectively winces as they wait to hear what kind of noise the impact makes. Anything other than a smashing sound is a bonus.

Pierce Sweeney currently plays for Exeter City in League 2. He recently posted this video of one of his shooting attempts in training, and it didn’t go very well:

Smashing your own windscreen with a shot in training… ????

The shot is pretty horrendous, you would think with the cars being that far away from the pitch they should be pretty safe. Unfortunately for Sweeney he managed to smash his own windscreen.

Hopefully this will give him some motivation to brush up on his shooting technique in the future. It might be best if he sets a goal up that isn’t anywhere near the car park.