Barcelona face Celta Vigo on Saturday night hoping to put a disappointing seven days behind them and to sign off with a win ahead of the international break.

The Catalan giants were defeated by Levante last weekend before being held to a goalless draw by Slavia Prague at home in the Champions League in midweek.

In turn, coach Ernesto Valverde will perhaps be starting to feel a bit of pressure and he will be keen to see a positive response from his players to get them back on track.

He’s aided by the return of stalwart Luis Suarez, with Mundo Deportivo noting that the Uruguayan international has been passed fit after suffering from an ankle knock over the past week which forced him to miss the encounter with Slavia.

Jordi Alba is missing though after he sustained a setback in midweek while Carles Perez and Carles Alena are snubbed on technical decisions.

As seen with the reaction below, the absence of the latter hasn’t gone down particularly well with many Barcelona fans, who hit out at Valverde over the decision as they were evidently eager to see the youngster be given a chance to impress.

Elsewhere, Arthur, Moussa Wague and Junior Firpo are in and so there is undoubtedly still plenty of quality on show for the reigning La Liga champions to get the job done and to pick up three important points to keep them top of the pile this weekend.

Time will tell if they are able to do so, but another setback here could certainly raise the pressure on both Valverde and the players as they will welcome the break with open arms as an opportunity to regroup and go again in a fortnight.

No Aleñá?? How is Valverde still coaching Barça? He is destroying everything we stand for! 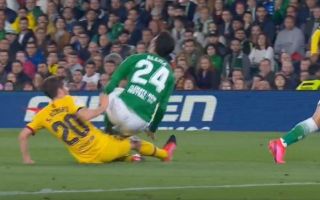