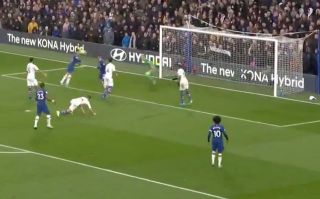 Chelsea doubled their lead against Crystal Palace through Christian Pulisic on Saturday, as he stayed alert and pounced on a chance inside the box.

The Blues took the lead early in the second half through Tammy Abraham, but with Palace pushing forward in search of an equaliser, they were made to wait to make the game safe.

After a patient and classy team move though, it was Pulisic who got on the end of a blocked effort from Michy Batshuayi to head home into the back of the net to make it 2-0, as seen in the video below.

The 21-year-old went through a period in September and the first half of October where he struggled to get into the starting line-up under Frank Lampard.

However, with his fifth goal in his last three Premier League outings, taking his overall tally for the season up to five with six assists to boot in 14 appearances across all competitions, the USA international is perhaps now staking his claim to be a permanent fixture in the starting line-up at Chelsea.

For now though, he will undoubtedly be delighted to contribute to the team as the Blues went in search of a sixth straight win in the Premier League which could move them up to second place temporarily.

Pulisic gets his goal!

5?? in 3?? for the American in Chelsea blue. pic.twitter.com/3cgcsDVA9d

Christian Pulisic scores his first #PremierLeague goal at Stamford Bridge, and just look at what it means to him! ???