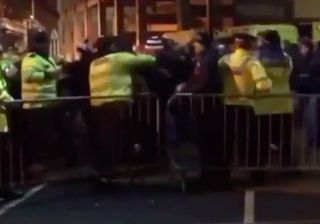 Wolves hosted Slovan Bratislava in the Europa League on Thursday night, with Raul Jimenez’s late goal the difference between the two sides in a 1-0 win.

The win puts the Premier League outfit in a commanding position to now advance from Group K and into the knockout stage, as they’ve collected nine points from their four encounters thus far and sit five points clear of third-placed Bratislava.

SEE MORE: Video: Disturbing scenes as Raul Jimenez KNOCKS OUT his opponent while trying to attempt an overhead kick

Not all the travelling fans enjoyed their trip to Molineux this week though it seems, as footage has emerged of a police officer striking a Bratislava supporter with a single straight right with such force that it knocks him to the ground, as seen in the video below.

While the police will undoubtedly be able to use force to control the crowd in the event that they are becoming hostile which appears to be the case in this situation, this surely oversteps the line and will potentially land the officer in question in trouble if they can be identified.

It’s unclear if the fan suffered any serious injuries as a result but The Sun report that three arrests were made with several allegations made against the travelling supporters over their misbehaviour at the stadium.

While that can’t be condoned, neither can this as it seems like excessive force and time will tell what comes of it.

New footage has emerged from yesterday's Wolves game against Bratislava. Massive fight ensues between the away fans and the police. Just wait till the 9 second mark. Anthony Joshua would be proud. pic.twitter.com/gyFH4lpZml