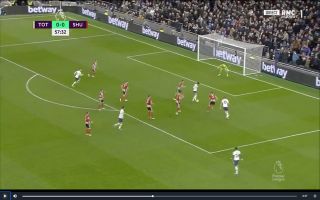 Tottenham forward Heung-Min Son has showcased his devastating goalscoring instinct to fire Spurs into the lead against Sheffield United this afternoon.

In the 57th minute of this afternoon’s Premier League clash between Spurs and Sheffield United, Heung-Min Son showed off his impressive reactions to latch onto to the ball and fire Tottenham into the lead.

Full-back Enda Stevens knocked the ball into Son’s path and the 27-year-old maintained brilliant composure to put the ball through Dean Henderson’s legs.

Take a look at the South Korean’s strike below:

Son has been the best player for Mauricio Pochettino’s side so far this season. The versatile forward seems to be getting into a hot streak right now.