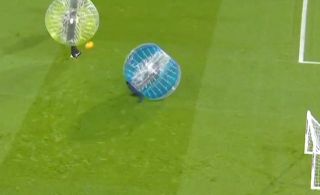 Jamie Carragher and Gary Neville seemingly enjoyed themselves on Friday night as they had a little game of zorb football.

The pair were on duty as Sky Sports pundits for the game between Norwich and Watford and decided that it would be a good idea to have a go at zorb football to keep themselves busy.

As seen in the video below, it was Neville who came out on top after knocking Carragher on his back before producing a brilliant lobbed finished into the net.

However, the hilarity of it all wasn’t finished there as Carragher went on to take his place in the gantry and proceeded to deliver an analysis piece on the encounter with Neville in real Monday Night Football style.

The former Liverpool man also got the last laugh as seen in the tweet below, as he blindsided Neville after their match and sent him rolling over with the pair both in fits of laughter.

Once fierce rivals on the pitch, these two legends continue to provide us with excellent punditry and memorable moments with their comedy…

.@GNev2 getting absolutely battered by @Carra23 after a game of zorb football ?? pic.twitter.com/VdDRtbiGV6