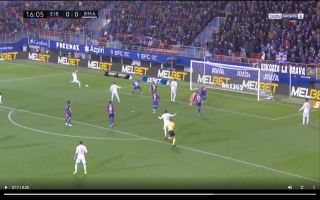 Karim Benzema showed off some lovely skill in the build-up to his opener for Real Madrid against Eibar this evening, the Frenchman hit the net with a composed finish.

In the 16th minute of this evening’s La Liga clash between Real Madrid and Eibar, superstar forward Karim Benzema tricked his way around the box before picking out Fede Valverde with a pass.

The ball spilled into Luka Modric’s path and the Croatian’s shot on goal was deflected away. The ball dropped to Benzema and the 31-year-old slotted the ball into the goal with a tidy left-footed finish.

Check out the Frenchman’s opener below:

Benzema has been in impressive form in the league for Los Blancos this season.