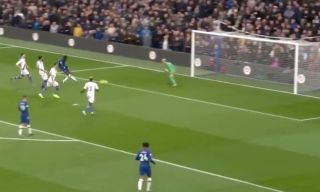 Chelsea found it tough going in the opening 45 minutes to find a breakthrough against Crystal Palace, but it didn’t take them long after the break.

Frank Lampard’s side were looking to make it six consecutive Premier League wins this weekend, and they knew that three points would move them up to second place in the table temporarily ahead of the remaining fixtures.

It didn’t look as though they would find a way through in the first half as Roy Hodgson’s side defended well to limit their chances, but they couldn’t hold out in the second.

As seen in the video below, Willian produced a deft first-time flick to set Tammy Abraham in on goal, and the Chelsea striker produced a clinical finish to give the hosts the lead.

That’s the 22-year-old’s 11th goal of the season across all competitions as he continues to deliver with Lampard showing faith in him to lead the line for Chelsea, and he’ll hope that it’s enough to send them on their way to another three crucial points.

However, he’ll owe a debt of gratitude to Blues teammate Willian for the superb assist from the Brazilian international as it arguably needed that bit of quality in the final third to cut through Palace’s defence.

He's barely had a sniff all game but the youngster gets his ninth of the season.

Lovely assist from Willian too! ? pic.twitter.com/lkO3pB7EbZ

And Tammy Abraham has his 1??0??th goal of the #PremierLeague season!

Willian with the filthiest of touches for that Tammy Abraham goal.