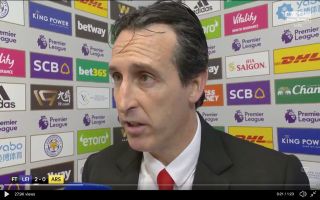 Unai Emery has insisted that “we need time and “patience” to make progress with the current Arsenal squad, the Gunners have been on a dismal run of form recently.

The Spaniard was quizzed on Arsenal’s regression since he took the reins from Arsene Wenger by Sky Sports after his side’s 2-0 defeat to Leicester.

The north London club are winless in their last four Premier League games, the side’s chances of challenging for the top four seem to be over after tonight’s loss against the Foxes.

Emery also reiterated that the club have “young players” that he’s hoping to achieve success with in the future.

Take a look at what the Spaniard had to say below, courtesy of Sky Sports:

"We need time. We have young players"

The former PSG boss touched on off-the-pitch “circumstances” that haven’t helped his side’s performances so far this season.

Emery responded with “Yes” when he was asked if he believes that the club are behind him given the side’s lacklustre performances lately.

Today’s clash gave Arsenal the opportunity to get their season back on track after a tricky two months.

Brendan Rodgers’ high-flying Leicester ultimately proved to be too difficult a task and the Gunners look like they’ll have to settle for a top six finish once again.