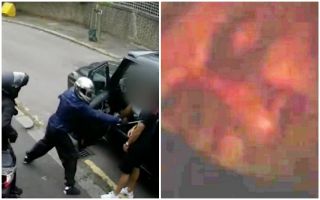 According to an exclusive report from the Mirror, one of Mesut Ozil and Sead Kolasinac’s attackers has been viciously beat up in prison, Ashley Smith almost lost an eye.

The Mirror shared a clip with the robber pleading for his life after being battered by a fellow inmate who accused him of robbing one of his friend’s mothers.

Sky News report that Smith was sentenced to ten years in prison for his involvement in the attempted robbery.

The Metropolitan Police recently released chilling new footage of the incident. Kolasinac didn’t even flinch when facing up against the screwdriver-wielding thugs.

The Mirror claim that the footage was captured from inside HMP Pentonville in north London, the footage was shared by a prisoner with a contact on the outside who posted the clip on WhatsApp.

It’s also reported that Smith’s lawyer claims that the robber “fears for his life” after the attack.

Ozil will certainly be eternally grateful to teammate Kolasinac for defending him against the thugs, the Bosnian should be cut some slack from some Arsenal fans.