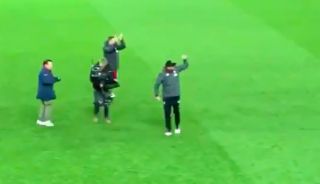 Reds fans love it – rival supporters think it’s all a bit of show from the German tactician.

Well, it might also be that he’s being egged on to do it by media who want to see it from him, if this clip below is anything to go by.

The cameraman asking Klopp to do the fist pumps ? #LFC pic.twitter.com/i5585sksx4

You can see clearly the cameraman follows Klopp closely and gestures for him to celebrate more passionately after his side’s 3-1 win over Manchester City.

It’s weird to see media types trying to stage stuff like this that should be spontaneous and natural, but whatever floats your boat…