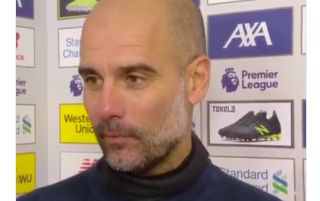 The Brazilian midfielder opened the scoring for the Reds, but it looked as though City should have had a penalty moments before as Trent Alexander-Arnold appeared to handle the ball in his penalty area.

"We showed why we are the champions"

Pep Guardiola was proud of his players despite defeat at Anfield

It wasn’t given, and Liverpool ended up taking the lead, with City never able to recover from that early setback at Anfield.

Guardiola, however, was in no mood to discuss it as he says in the Sky Sports clip above that it’s a matter for the referees to explain.