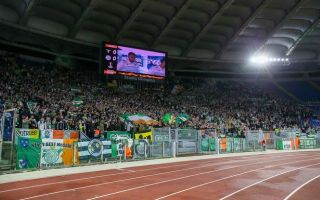 Plenty of fans like to throw accusations north of the border about the standard of football and possible comparing it to a pub league, but money can’t always give you everything.

Obviously the financial gulf does see a lower standard of player in Scotland, but you can be guaranteed that every game matters and the fans don’t stand around taking selfies and trying to video every single moment in the manner of a true tourist.

This picture has emerged which compares the travelling support between Celtic and Man City fans when they played in Rome. the difference is pretty striking:

All the money in the world cant buy you support ?? we do not too bad for a “diddy league” ? pic.twitter.com/YwvxWYHJk8

Neil Lennon led his team to a heroic 2-1 win over Lazio on Thursday which saw Celtic do the double over the Italians this season. The pictures show a pretty big difference in the dedication and support the two fan bases show towards their side.

City might be suffering from pricing their original fans out of the game, but it’s always funny to see how a large section of English fans want to rubbish Scottish football at any opportunity – it’s almost like there’s a pretty big insecurity about the so called “best league in the world”

Either way, sometimes money can’t buy you passion, history or a decent support.