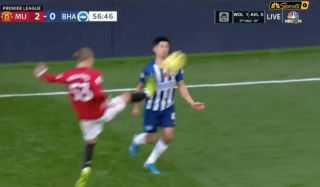 Manchester United youngster Brandon Williams can count himself lucky not to be shown a red card during his side’s win over Brighton at Old Trafford today.

United claimed a 3-1 victory over the Seagulls at home today, as Solskjaer’s side got back to winning ways in the league.

During the match, United can count their lucky stars that they weren’t reduced to 10 men during the second half, after defender Williams committed a rather dangerous challenge on one of Brighton’s players.

Williams effectively kicked the Brighton player in the stomach, and how he was able to stay on the pitch, even with VAR, we’ll never know…