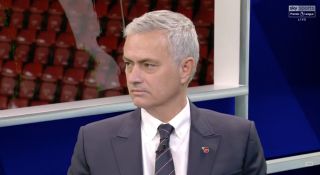 Jose Mourinho has claimed that the Premier League title race will be over should Liverpool beat Manchester City at Anfield later today.

Guardiola’s men take on the Reds away from home this afternoon, as they look to close the gap on the Merseyside outfit to three points with a win.

"If Liverpool win today, I think they will win the league."

The Super Sunday panel discuss whether this is a 'must not lose' game or not for Manchester City.

However, should the result go the other win, former Man United boss Mourinho believes the title race will be good as done, with the ‘Special One’ only seeing the Reds going on to win from there.

It’s fair to see, if the Reds to claim all three points today, it’ll look like an impossible task for City to win the league from there on out…