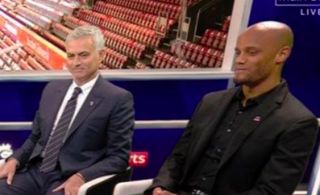 During the coverage of Liverpool’s 3-1 win over City at Anfield, Mourinho discussed the title race and gave Kompany a brutal reminder about his club’s lack of Champions League success – a trophy they’ve been desperate to win for some time.

While the Portuguese says there was once a big gulf between the two sides in their previous tussles for the title, this is no longer the case.

Mourinho puts City firmly in their place by saying they are Premier League champions, but Liverpool are European Champions.

LFC fans will certainly have enjoyed this as it’s gone viral on social media this evening, largely being shared by pro-Reds accounts like the one above.

The special one forever. pic.twitter.com/AhfoaegXTG

And now it brings me joy that Mourinho is schooling him on Sky Sports. Claiming City have come back from behind before and Liverpool have led the league. "But you were the best team? Liverpool are now the European Champions!"

Vincent Kompany: “Liverpool may struggle to handle the pressure of a title race again this season with City”.

Mourinho’s response: “You are champions of England, but remember, they are Champions of Europe”.