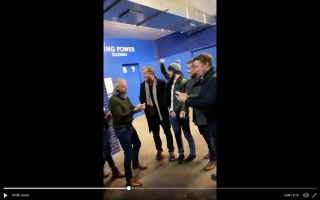 Piers Morgan has taken to Twitter to share a video of himself being ‘mobbed’ by fans whilst he was at Leicester’s Premier League clash with his beloved Arsenal yesterday.

The controversial television personality has some loyal supporters, one particular fan can be heard shouting “Piers, your a f***ing geezer”.

The 54-year-old then took a picture with a group of his fans before heading off.

Morgan certainly seems to be more liked than many people would think given the way he’s often portrayed. The broadcaster watched the clash from an executive box alongside Jamie Vardy’s wife Rebekah.