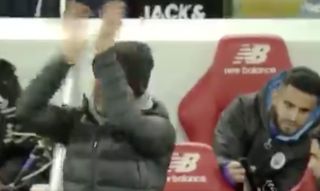 Riyad Mahrez was supposedly caught showing Man City assistant manager Mikel Arteta a clip of Salah’s dubious goal during the first half of their clash against Liverpool.

City went into half time 2-0 down after both Salah and Fabinho found the net during the first 45 minutes.


Salah’s header came after a cross from Robertson was turned home by the Egyptian’s head, with some claiming that the forward’s header was marginally offside.

And it seems like Mahrez shares that opinion, as he was caught showing Arteta a clip of Salah’s goal during the first half.

Strange one this, we must admit…