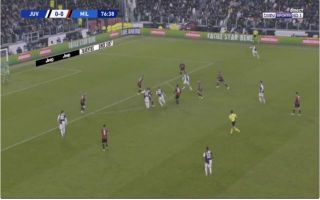 He probably won’t admit it, but it’s likely that Ronaldo just got a bit more furious as Paulo Dybala scored a sublime goal to give Juve the lead against AC Milan.

Dybala replaced Ronaldo on the 54th minute with the Portuguese star storming down the tunnel in a tantrum. Maurizio Sarri will now feel the swap was justified as the Argentine provided the breakthrough:

If the game stayed at 0-0 or Milan won then Ronaldo would’ve been able to point the finger at Sarri and blame him for the substitution, but now if he has any complaints it will just look like he’s not a team player.

Dybala has often had to make do with playing second fiddle for club and country but he’s a magnificent player. Hopefully he gets the chance to start the next game after this.