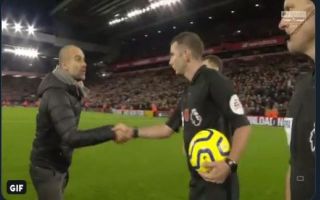 It does seem pretty clear that Pep Guardiola will be in prickly fettle this evening after his side were beaten 3-1 but denied two penalties against Liverpool.

The first one looked particularly egregious, it’s almost like it would’ve been given if Liverpool didn’t go up the other end to score. Cancelling one goal to give a penalty at the other end might’ve sent the VAR criticism into overdrive after the game.

Poor decisions were made yet again, but it seems the ref took the easy way out rather than making the correct decision for the first penalty claim.

READ MORE:Video: Pep Guardiola absolutely LOSES IT during Liverpool vs Man City after away side denied penalty for handball

Guardiola thanks the refs from soccer

Pep Guardiola sarcastically thanking the refs after the game. “THANK YOU SO MUCH” pic.twitter.com/YVkDdDL6am

It’s clear that he’s saying “thank you so much” which is pretty funny. You can be pretty sure that he isn’t happy about everything, but he’s done a fantastic job of distracting everyone from the obvious failings of his team today.