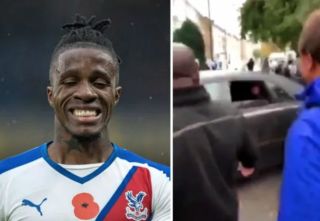 Chelsea beat Palace 2-0 at Stamford Bridge yesterday, with Zaha having a game to forget, as he was dealt a torrid time by Blues right-back James, who was immense.

Chelsea fan to Wilfried Zaha: “Reece James in the pocket”

Following this, Zaha was trolled on the streets of Chelsea by Blues fans who claimed James pocketed the Eagles star on Saturday afternoon.

Zaha responded to these claims by launching a swear-filled comeback at the Chelsea supporters before winding down his window and driving off.

‘We’re all with you’ – Chelsea star sends lovely message to League One talent forced to retire at 19 with Blues ace also offering dinner in classy gesture February 25, 2021 17:57
England National Team