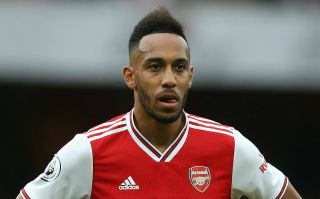 Figures at Arsenal are not too impressed with star striker Pierre-Emerick Aubameyang after a slightly surprising development.

According to The Athletic, Aubameyang has struck up a relationship with the controversial AFTV – a fan-made YouTube channel who have something of a reputation for spreading negativity about the state of the team.

The report explains that Aubameyang has been seen liking some of their posts, including ones critical of manager Unai Emery and midfielder Granit Xhaka, which hardly seems helpful for team spirit and unity within the Gunners’ camp.

The Athletic describe the Gabon international’s activity as having ‘irritated’ some people at the Emirates Stadium, and it remains to be seen what the fallout from all this will be.

Aubameyang has been a world class performer since joining Arsenal from Borussia Dortmund, but there’s no doubt he could risk his popularity in north London by doing things to potentially destabilise the club off the pitch.

The Athletic add that the 30-year-old has allowed one AFTV regular, Troopz, to use his executive box at the Emirates, and has been asked to stop engaging with him.