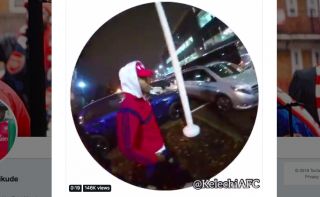 An Arsenal fan approached Pierre-Emerick Aubameyang after the 2-0 defeat to Leicester City at the weekend.

And it’s fair to say the Gabon international looked pretty miserable with life after yet another big setback for the Gunners.

Leicester won 2-0 at the King Power Stadium, meaning Arsenal are now on a run of just one win in their last seven games in all competitions.

Local Man had a brief chat with some of the players after our loss to Leicester yesterday. Spoke to Aubameyang at length. They were really down. Did my best to lift them

We have to keep supporting the whole team and stick together in trying times ?#arsenal #aubameyang #emery pic.twitter.com/0KPiqOvkYu

Aubameyang has been a key performer for AFC this season, but even he hasn’t been able to help the team out of its current rut.

This video above shows it’s clearly getting to him…