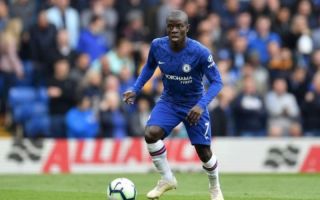 Returning to the starting eleven this past weekend, Chelsea midfielder N’Golo Kanté has given Blues fans more reason to celebrate as the star midfielder has stated that he would be happy to finish his career with the London club.

Since his arrival at Chelsea in 2016, Kanté has won a Premier League title, the FA Cup and individually picked up the PFA Player’s Player of the Year award in 2017.

Since signing a new contract in 2018, tying him with the Blues until 2023. the Frenchman has gone on to have a phenomenal three years for both club and country.

With a resume as lucrative as Kanté’s, it has come to nobody’s surprise that La Liga giants Real Madrid have expressed interest in bringing his talents to the Santiago Bernabeu.

Cited by Sun Sport earlier this, the Chelsea star was linked with a £100million move to Spanish capital next summer.

As current Real Madrid stars Luka Modric and James Rodriguez look set to both be on their way out of the club, the addition of a player such as Kanté in the centre of the midfield, his arrival would be a welcome and much-needed one.

With Chelsea’s young squad having won six of their last six league games, the inclusion of Kanté’s experience within the side will be essential in the seasons to come.