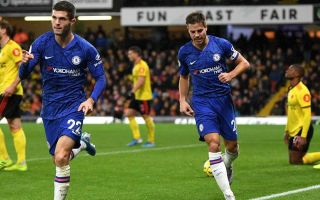 Pundit Garth Crooks has written a rather jokey section in his Premier League team of the week column regarding the schooling given by Chelsea’s Christian Pulisic to Crystal Palace defender Joel Ward on Saturday.

The Blues beat Palace 2-0 at Stamford Bridge thanks to goals from Pulisic and Tammy Abraham, with the young USA international a particularly impressive performer for Frank Lampard’s side.

It’s taken some time for the summer signing from Borussia Dortmund to settle in and become a regular for Chelsea, but in recent matches he’s really shown his quality.

Ward certainly had a tough time dealing with the 21-year-old, whose trickery and skill on the ball really is making him look more and more like a fine long-term replacement for Eden Hazard, who left for Real Madrid in the summer.

Crooks was hugely impressed, and joked about how much damage he did to Ward in the game at Stamford Bridge as he included Pulisic in his team of the week on BBC Sport.

“Joel Ward should be given time off to get over the run around Christian Pulisic gave him at Stamford Bridge in the London derby,” Crooks said.

“Within the opening exchanges the American danced round the full-back only to be saved by Crystal Palace goalkeeper Vicente Guaita.

Christian Pulisic had a fine game for Chelsea against Crystal Palace

“Pulisic then stepped over the ball so emphatically Ward nearly had to pay to get back in the ground.

“Pulisic not only loves taking players on but scoring goals and he’s good at it. He’s not afraid to get in where it hurts either which is always a very good indicator.”