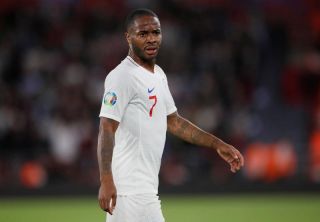 England have confirmed that Man City star Raheem Sterling will play no part against Montenegro in their EURO 2020 qualifier on Thursday night.

As noted by the Daily Mail, Sterling was said to have been involved in an altercation with Liverpool defender Joe Gomez on Monday.

It’s said that it began over banter following Liverpool’s win over City at Anfield over the weekend, which in turn resulted in Sterling grabbing Gomez by the neck before their teammates separated them.

It appears as though it’s Sterling who has paid the price for the incident, as the FA released a statement on Monday night to confirm that he would be left out by Gareth Southgate for the encounter later in the week.

“We have taken the decision to not consider Raheem for the match against Montenegro on Thursday,” Southgate is quoted as saying in the statement.

“One of the great challenges and strengths for us is that we’ve been able to separate club rivalries from the national team. Unfortunately the emotions of yesterday’s game were still raw.

“My feeling is that the right thing for the team is the action we have taken. Now that the decision has been made with the agreement of the entire squad, it’s important that we support the players and focus on Thursday night.”

It’s unclear whether or not Sterling will be involved against Kosovo on Sunday at this time, but given the tension involved in the situation, Southgate will perhaps make a call on that later in the week.

Nevertheless, it’s clearly not what he would have hoped for as the last thing he wants to disrupt the progression that his England side is making is rivalries going too far between players from club level when they report for international duty.

It appears as though it has this time round, and time will tell what it means for Sterling moving forward as the fact that he’s the only one to miss out after the reported incident could also have a lasting effect.