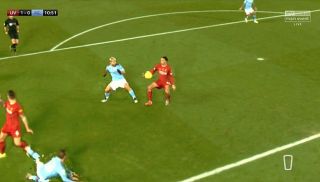 Chris Sutton has hit out at the Premier League’s explanation for allowing Liverpool’s goal to stand when Manchester City look like they should have been awarded a penalty moments earlier.

Reds right-back Trent Alexander-Arnold clearly seemed to touch the ball with his arm in the penalty area, but nothing was given as his side broke up the other end and took the lead through a Fabinho goal.

Liverpool went on to win 3-1, and though they looked good value for their win, it’s easy to see how people will feel that that early bit of luck may have massively swung things in their favour.

The game could no doubt have gone very differently if instead of going a goal down so early, City had indeed been given a penalty and gone 1-0 up.

Sutton was not at all satisfied with the Premier League’s explanation for the VAR ruling that deemed Alexander-Arnold not to have deliberately handled the ball in the box.

Writing in the Daily Mail, the pundit said: “Manchester City have every right to be enraged. How was this not handball? Trent Alexander-Arnold’s arm was away from his body. It was in an unnatural position and the ball clearly struck it.

“This was the biggest moment of this match. The opening goal of this game was always going to be huge and VAR should have spotted Alexander-Arnold’s infringement.

“Apparently, according to a Premier League statement, it did ‘not meet the considerations for a deliberate handball’.

“What a load of drivel. They should have chalked off Liverpool’s opener, and City should have had a penalty at Anfield. You can argue about Bernardo Silva’s potential handball before Alexander-Arnold’s, but the City man’s arm was in more of a natural position when the ball ricocheted back off him.

“The Liverpool full back’s arm wasn’t and he had more time to move his away, so these were two very different scenarios. Had Alexander-Arnold not blocked the ball with his arm, it might have trickled to a free Raheem Sterling behind.

“There is no consistency. After the international break, we will no doubt see a penalty awarded in the Premier League for something similar.”

Some will say these things balance themselves out over the course of the season, but it doesn’t help convince those who already doubted if VAR would really help clear controversies like this out of the game.