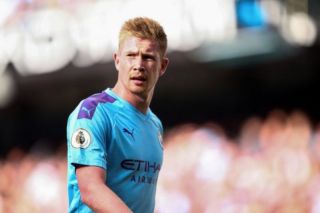 Is it just friends catching up? Or a prelude to one of the biggest game-changing transfers in Premier League history? Many Liverpool fans will be hoping for the latter and they are now salivating at the prospect of having a player with the talent of De Bruyne in their already vastly talented squad.

“Kevin De Bruyne over [Kylian] Mbappe. I’d rather De Bruyne in the our squad,” tweeted one Liverpool fan, while another added: “I’d rather us sign De Bruyne than Mbappe.”

A third stated: “Kevin De Bruyne was a Liverpool fan growing up, about time he joins us… would be lovely.”

After winning the Champions League last season, Liverpool’s list of possible transfers seems to know no bounds. With The Express reporting that World Cup winning striker Kylian Mbappe could be stepping onto the Anfield pitch next season in a record £215m deal, despite the desire of many fans wanting De Bruyne over the young Frenchman.

Speaking to SkySports, City midfielder De Bruyne spoke of his admiration for Liverpool and the passion of their fans: “I like Anfield, I like it a lot. I love people being on you, being noisy, that is what it’s all about. I love the passion of football.”