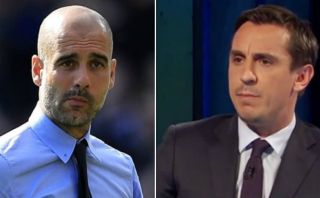 City were beaten 3-1 at Anfield and, despite one or two controversial refereeing decisions, few could really argue with that result on the balance of play.

Speaking after the match, Neville told his podcast on Sky Sports that he was disappointed that Guardiola could not come up with anything to surprise people on the day.

The former Barcelona and Bayern Munich boss is widely regarded as one of the finest managers of the modern era, and his record of success everywhere he’s been is no doubt incredible.

However, Neville does seem to have a point about his lack of ability to dream something up here for such an important game, with the defeat now leaving City nine points behind the league leaders.

The best managers can alter their teams and tactics to cope with injuries and Guardiola showed no sign of that as he lined up as expected.

Neville suggests that Guardiola could really have spent longer planning ahead for this game and he was disappointed that this was the best the City boss could come up with.

He said: “Everyone thought Liverpool would win, everyone though this was the moment; City haven’t got the defenders, Claudio Bravo in net.

“This is when the great teams somehow muster a performance, go in and turn it on its head. And I just had the feeling that Pep Guardiola would have been thinking about this game for the last two or three weeks.

“And I just felt Pep Guardiola would have something different for us, something unique. Something that we’ve come to expect from him over the last five, 10, 15 years.

“And I got what was normal, what I expected. The team the newspapers and us picked in the morning. Fernandinho and [John] Stones at centre-back.

“Manchester City played well in the game from a football point of view. But that back four and that goalkeeper were never going to be able to cope with this ground.

“Forget this team, these strikers, this ground. You have to have a toughness, an authority to come and play here, it’s the toughest of places – and Man City didn’t have that in defence today.

“Whether [Nicolas] Otamendi, [John] Stones and [Kyle] Walker as a back three would have fared better, with wing-backs, whether they could have gone with something completely bizarre and turned it on it’s head.

“That’s what I’ve come to expect from Pep: innovative, creative, something that just shocks you like you wouldn’t believe. And even if it doesn’t come off you think ‘well at least he tried to something’. But I didn’t think it was very Pep-like.”