BBC pundit Garth Crooks compiled his Premier League Team of the Week with Chelsea and Leicester City both having two players each.

Christian Pulisic and Willian were both impressive against Crystal Palace this weekend. While the former scored, the latter provided an assist and linked up brilliantly with his forwards. The two Leicester players who were in Crooks’ team were Ricardo Pereira and Jamie Vardy. The former has been influential for the Foxes at the back and has been a key reason why they have conceded the least number of goals in the Premier League so far. He has made the second most number of tackles in the league as of now and given his form, there’s much more to come from him.

Vardy has been magnificent for Leicester City this season, amassing 11 goals and two assists in 13 appearances across all competitions.

Watford’s Ben Foster was the only player from last week who found a place in the XI. The 36-year-old produced a fine performance against Norwich as the Hornets registered their first Premier League win of the season. Crooks went for a three-man defence which had Newcastle United’s Federico Fernandez and Sheffield United’s Chris Basham alongside Pereira.

Fabinho had an outstanding game against Manchester City yesterday, scoring a screamer to mark his second goal for Liverpool. The Brazilian was in the XI alongside Wolves’ Ruben Neves, Willian and Everton’s Tom Davies. Gerard Deulofeu joined Pulisic and Vardy in attack.

Here’s the Premier League Team of this week: 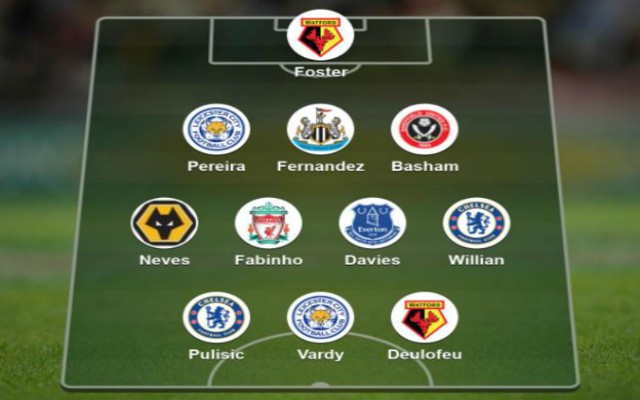